Pedal Commander is a subsidiary of Vitalen Auto Performance, Incorporated, and manufactured in Turkey since 2011. After having major success in Europe, the decision was made to relocate to the United States in 2015. Now Headquartered in beautiful Southern California, Pedal Commander is known for having the best selling Throttle Response Controller, with the fastest processor on the market. Pedal Commander is sold worldwide on six continents, and still growing. At Pedal Commander, we live life Full Throttle, keeping us at the forefront of the automotive industry.

Unsure on which model you require? Find your vehicle on our application guide HERE

Manufacturers produce vehicles with a "one size fits all" process in an attempt to make most customers happy. For lack of a better term, they make the vehicle “idiot-proof. But you don’t just move into a house and leave it alone, do you? No, you customize it to make it more comfortable and convenient for your individual needs. This is what The Pedal Commander does for your vehicle. The Pedal Commander gives drivers full control of their gas pedal sensitivity. With 36 preset levels, the Pedal Commander has a setting for every driving style. You truly have the ability to make your vehicle’s response exactly how you want it when you want it.

Why Do I need Pedal Commander?

Vehicles are changing every year, mostly because of the rate at which technology is developing. The systems that were once mechanically controlled are now controlled by the vehicle’s computer. One such new system is the Electronic Throttle Control (ETC), known as drive-wire-wire, which is an automobile technology that electronically connects the accelerator pedal to the throttle, replacing a mechanical linkage. A typical drive-by-wire system has 3 major components: (1) an accelerator pedal model, (2) a powertrain/engine control system (PCM/ECM), and (3) a throttle valve that opens and closes by the electric motor. It also has several benefits such as reduced weight to take the pressure off the engine, better placement for easier time control and flexibility, and helps improve fuel economy. However, it has its limitations. 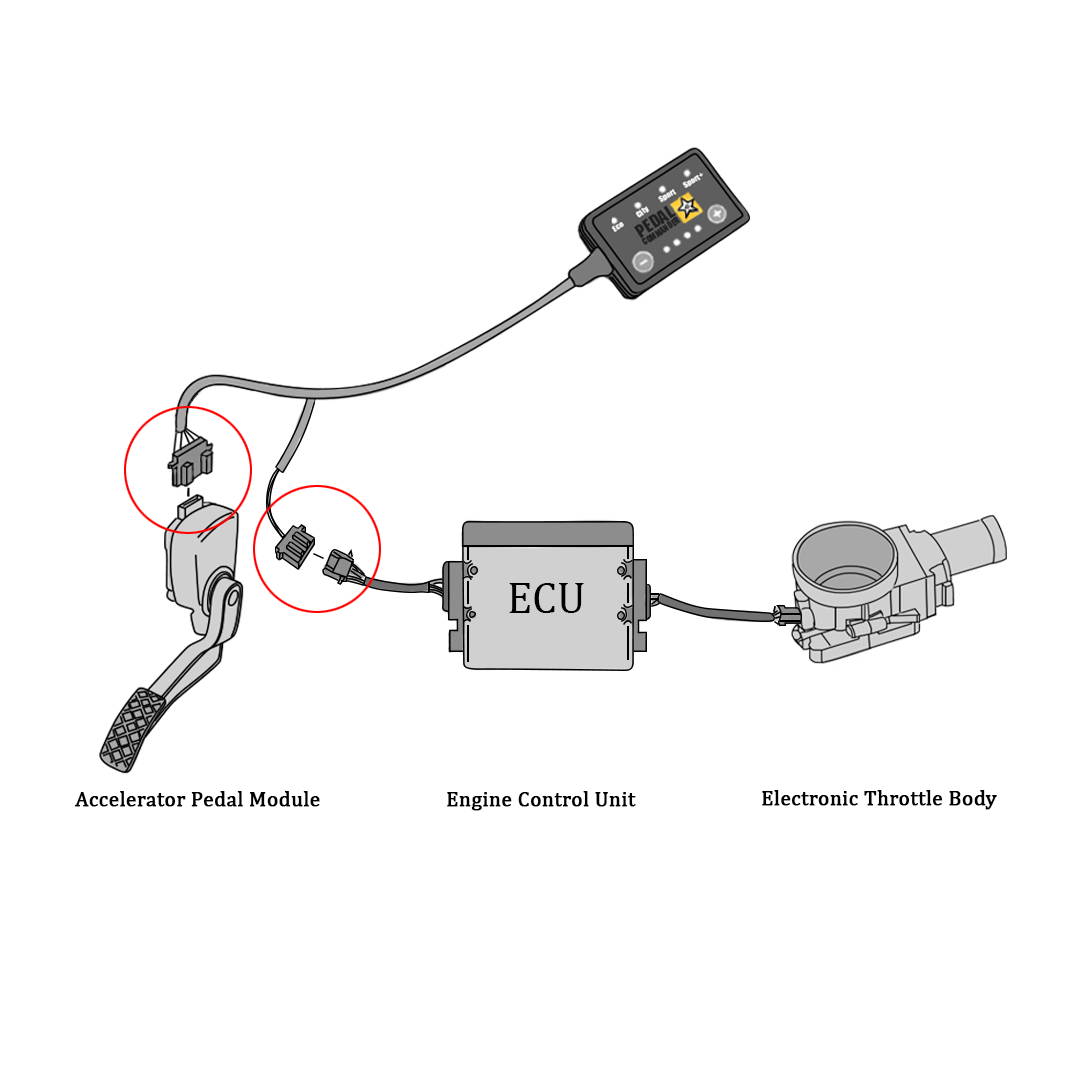 Pedal Commander solves this problem. The Pedal Commander connects in-line with the ECT system at the Pedal Position Sensors and is designed to take the information at the PPS and compile it in a high-speed control circuit. It also slightly advances that number and sends it directly to the ECU. By sending the information to the computer this way, a couple of checks that the engine computer will make can be bypassed before sending the signal to open the throttle plate. This gives you the ability to eliminate the delay from your accelerator (gas pedal), allowing your engine to respond faster. As a result, your gas pedal becomes more sensitive for a sportier or an old school feel.

Press the Star Button to change the mode.

Press the "-" or "+" to change throttle sensitivity.